Vlad the Impaler – the man behind Dracula

Dracula, the bloodthirsty vampire, is one of the first things that come to mind when hearing about Romania or it’s famous region, Transylvania. It’s enough just to hear the name and an image pops in your head: the eerie castle high on a rocky hill surrounded by bats, creaking doors and narrow staircases that lead to the basement where the Count gently pushes over the top of his coffin and leashes towards your bare tourist neck to suck the life out of it.

For this, we have Bram Stocker to thank. He is the writer who imagined Count Dracula and placed him in Bran Castle, Romania. Furthermore, the movie adaptation with Keanu Reeves and Gary Oldman strengthened the myth increasing the dissatisfaction of historians and the joy of those who are in the tourism business.

But Count Dracula is not only a fictional character; he is based on a living breathing prince known as Vlad the Impaler or Vlad Dracul III. Probably “the Impaler” and “Dracul” (literally meaning the devil or Satan) give some clues about why Stoker chose him as an inspiration. They’re not the type of names one gives to gentle souls passionate about poetry and harp music.

So who is the real man behind the legend, how did he get his name and, more importantly, should you tie garlic around your neck and carry holy water in your pockets when traveling to Romania?

Before booking a Dracula Tour and expecting the guide to transforming into a bat you should find out some things about Romanians and vampires. This will surprise you just as much as the real story of Count Dracula, the Walachia Prince is known as Vlad the Impaler.

The vampires, as mythical creatures, are not Romanian. They do not exist in the traditional folklore. We have other scary beings such as Moroi/Strigoi. They are the ghost turned the evil spirit of someone who recently died and who are crawling out of the grave at night disguised as an animal or some other creature making the living fall ill or destroying the crops and cattle. The only way to destroy them is to dig them up, pierce their heart with a metal spike (same with vampires) and burn the body.

Having the fact that at the time when Stoker was writing his famous novel this tradition still took place in Romania, there is a possibility he drove inspiration from it.

From Vlad the Impaler to Dracula

Vlad III was also known as Vlad the Impaler, Vlad Dracul or Vlad Dracula. The Impaler comes from impalement, a method of torture and execution performed by penetrating a sharp stake through the body of the victim. Although it was a popular method in the Medieval Period and used by most rulers in Romanian territories, Vlad III remains the most famous for it.

Dracul (translates to the devil in Romanian) or Dracula comes from the name of his father, Vlad II, a first-class member of the Order of the Dragon. Dragon (Draco) sounds similar to Dracul (devil) and Dracula is the Slavonic genitive form.

Vlad the Impaler – the man behind the legend

The birth and death of Vlad III are not known precisely. He was born in the Transylvanian town of Sighisoara somewhere between 1428-1431 and died in late December 1476 or early January 1477. The three-story stone house in Sighisoara as well as the burial place, on an island in the middle of a lake in the north of Bucharest, can be visited in an Extended Dracula Tour. This will take you on a journey in the footsteps of Vlad the Impaler the man, ruler of Wallachia, and Dracula, a character of myth and legend.

He spent half of his life as a hostage (1442-1448), as a fugitive(1448-1456) or in detention (1462-1476).
Vlad’s father, ruler of Wallachia, did not support the invasion of Transylvania by the Ottomans. Hence Vlad and his younger brother, Radu, were held hostages by the Sultan until their father acknowledged the sultan’s suzerainty. Trivia: while the two brothers suffered the same faith they went in opposed directions. Vlad became known for his fight against the Ottomans, Radu supposedly became the Sultan’s lover and got the nickname “The Beautiful”.

After his father’s death, Vlad seized Wallachia from his cousin and during his lifetime ruled three times as prince or voievod. The first time he took Wallachia with Ottoman support and the second with Hungarian support.
He is known for his against the Ottoman Empire and fought to strengthen the central government.
Vlad the Impaler moved for the first time the Princely Court to Bucharest (the Old Princely Court built in the 14th century and Dracula’s tomb can be visited in a day in a Bucharest city tour.)

Vlad III is the most famous personality of the Romanian Middle Ages.

Some historians say that Vlad III is not distinguished by anything special than the other rulers of the time. An inside joke compares him with Stephan the Great, ruler of Moldavia, that also used to impalement as a method of execution but due to the construction of churches is now considered a saint.

Dracula’s bad reputation comes mainly from Ottoman, Hungarian and Byzantine sources, exactly the people he fought against and who could profit from the gruesome stories.
The most known, The German Stories, a series of bloody tales that portray Vlad as an irrational, violent, bloodthirsty and cruel ruler, where released by Mathias Corvin, emperor of Hungaria, to justify stopping the anti-Ottoman crusade.

Everything that came after just took the original stories and exaggerated them. He was dining in his garden among impaled people with blood flowing under his feet and table or he used to catch rats or buy birds to torture and kill. 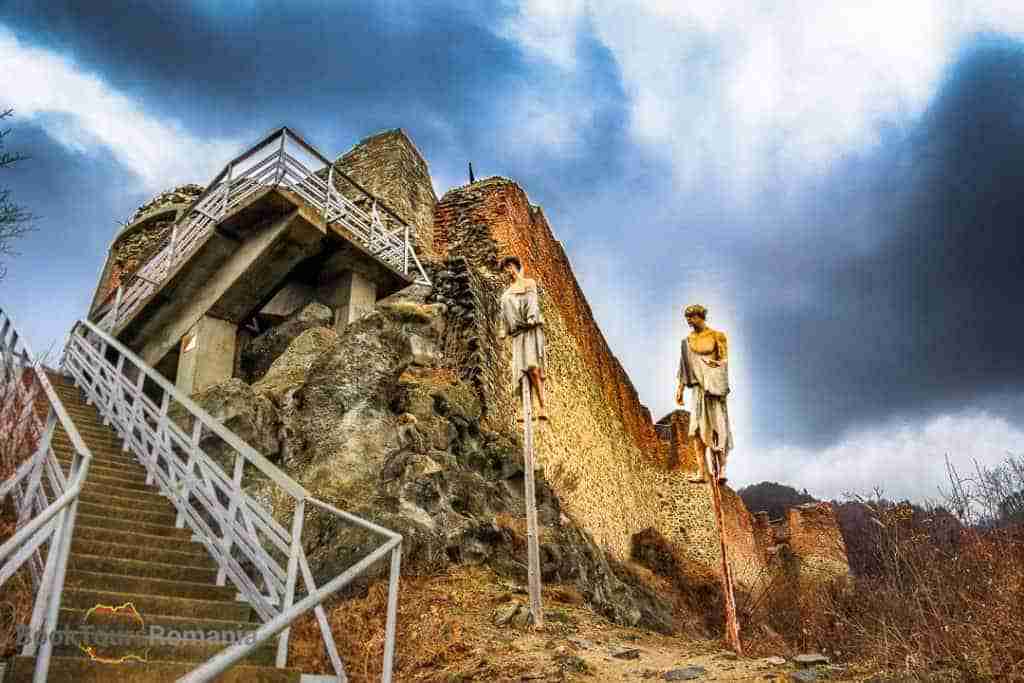 Impaled people by Vlad the Impaler

Although there is no real connection between Vlad the Impaler and Bran Castle, the construction is believed to be Dracula’s lair. For the ones who are searching for Count Dracula with his dark cloak and sharp fangs, a Halloween party at Dracula’s Castle gives exactly the amount of thrill they were searching for. And while in the area the remote villages and medieval towns of Transylvania should not be missed.